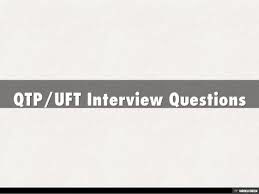 Here are some basic QTP(Quick Test Pro) or UFT automation Interview Questions with Answers. These questions are both basic and popular. QTP is now called UFT(Unified Functional Test)

If you need a full set of interview questions that are popularly asked during interviews, look at the book on Amazon with the title: Cracking the popular QA interview questions and answers. It has 135 questions with guideline and example response. It also has the basic refresher on QA concepts.

Here is the Amazon link to obtain a copy of the QA Interview questions book: http://amzn.to/2qxW6or

122. How many types of recording modes are available in QTP/UFT?

Normal (by Default recording): In this recording mode QTP identify the object irrespective of their location on the screen. It is done by recording object based on application window.
Analog Recording: it is used when exact mouse movement and action performed by mouse is important. Used in testing the paint application and signature made with the help of mouse.
Low Level Recording: it helps in identifying those objects which is not recognized by the QTP. It is used when the location of object is changing inside the screen.

123. What is an object repository in QTP?

Everything in AUT when using QTP is an object. The recording scripts recognize each button, image, checkbox as an object. In QTP, there are two types of object repositories

124. What is data-driven testing in QTP?

Data Driven testing is a term used when testing for multiple sets of data. For performing high quality testing, the testers would want to test with various test conditions to ensure the application is functioning as expected under different set of data/conditions. With the use of QTP/UFT, the tester can create multiple sets of data either through using a data sheet given by the tool locally or use an external excel sheet, .csv so the script can use each row and execute the tests in a cyclic manner until the last row of data. The benefit of using an external data sheet is that it can be used across multiple tests or test suites unlike a local data sheet where the data is only for that script saved locally.

Add-ins in QTP enable the testers to use certain capabilities of the tool efficiently depending on the type of technology the AUT is built on. Loading the add-ins for example, a .NET application, will help store certain functions in the memory and enhance capabilities.

126. Is it possible to call one action in QTP from another?

Yes, this is possible with QTP. There are two ways to do this, one is call to copy action and the other is call to existing action. Call to copy action will actually copy the entire action into another including script and datatable. For call to existing action, only the reference to the action is copied, in which case, we can only view it read-only and the script and datatable are not copied into the new action.

127. What do you do when you get an error ‘object not identified’ in QTP?

Object not identified is a common error when working with scripts in QTP. Object cannot be identified for a couple of reasons, when the page load is slow, and the script moves faster, or if the object has somehow changed its properties. I would use the ‘object spy’ to get all the information of that object, understand the differences between the properties. Object Spy helps in determining the run and test time properties of the application under test. I will also make sure ‘Smart Identification’ is enabled. Most of the times, inserting some wait() statements will get past the error. Sometimes, I would have to use the expert view and change the object properties it is checking for, if they have changed in the application and the script running was recorded and enhanced before.

128. What are the different types of views in QTP?

QTP has two basic view types. One is the Keyword view and the other is the Expert view. Keyword view shows the steps in a tabular format, while the Expert View gives the VB code for every step of the keyword view.(Tip: Most of the enhancing, debugging of the code is done using the expert view)

This is a standard QTP property to fetch property values of a run-time object.

131. What is the difference between functions and actions in QTP

Function is basically a VBScript programming language function. Functions can help do a particular coding and can re-use the code.
Actions are part of QTP framework that have their own data table and object repository. Actions help make the test modular and re-usable.

132. How do you declare a variable in QTP?
A variable can be declared by using the word DIM. You can then set it to a value with the SET keyword.
Example: DIM x
SET x=39

133. What is the standard time delay in QTP for web-based applications

The QTP standard is 60 seconds, but you can change this under test settings.

Yes, SQL Engine is embedded with QTP Tool, so we use SQL Statements directly in QTP Test Pane as well as in the Function Library.

135. What is the difference between Test Objects and Run Time Objects?

Test Objects are the ones that are identified, during testing, in other words, these are generic objects on the web page or application that QTP can recognize. Each time an app runs, there are also other objects created during run-time which are called run-time objects. These runtime objects essentially map to the test objects.

You have Successfully Subscribed!

You have Successfully Subscribed!